New technology is simmering in the hands of the TekLab team. Not only has the interest of the University of Bergen been sparked, but the University of Stavanger and Volda University College too are staying tuned. They are all talking about the Microsoft HoloLens 2. 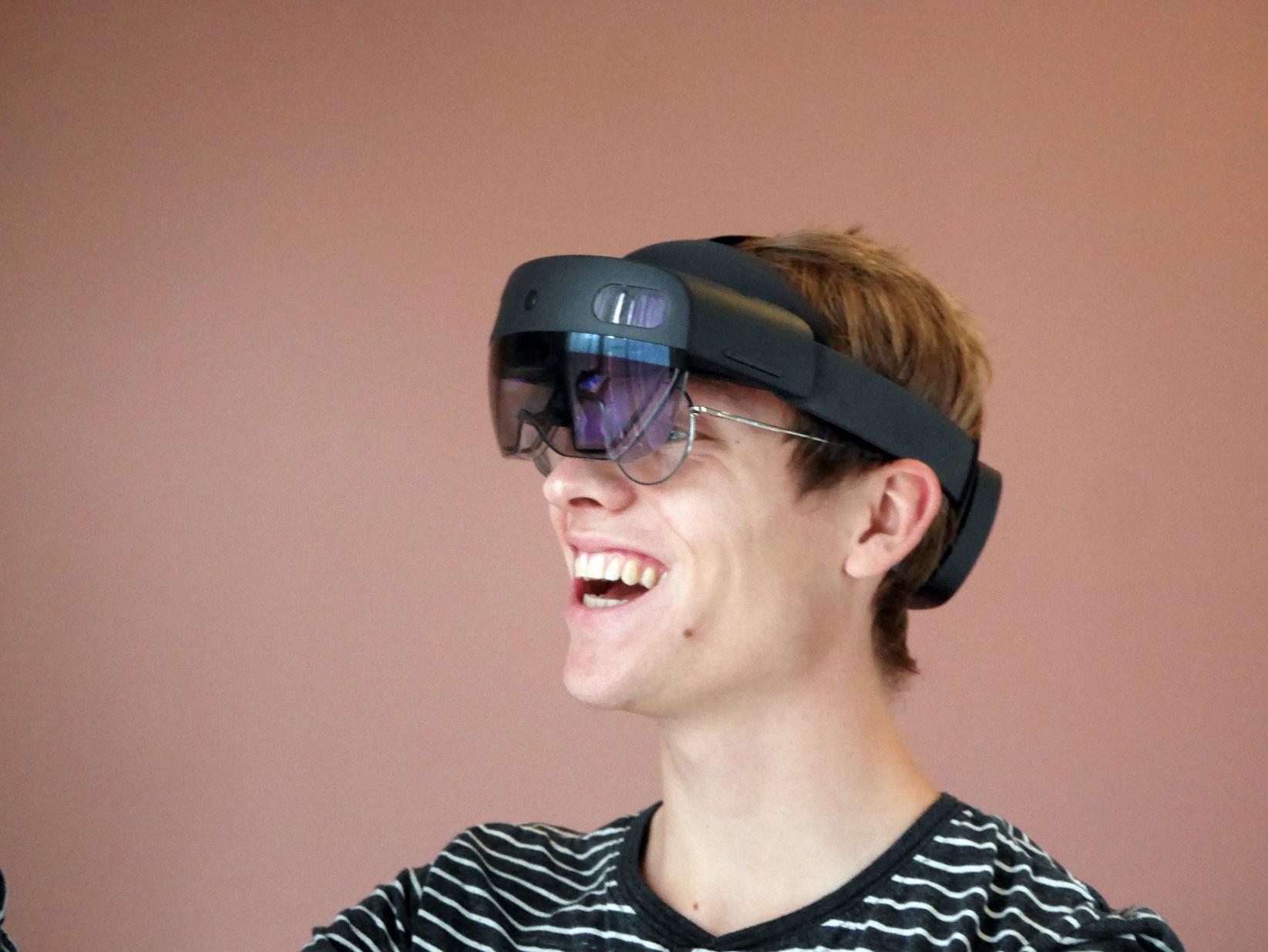 The Microsoft HoloLens 2 is a set of augmented reality (AR) glasses which allows the bearer to view holograms being projected into the real world. The HoloLens 2 is the second iteration of Microsoft’s HoloLens line-up and is the cutting edge of what augment reality (AR) currently has to offer.

The glasses are equipped with a 2k see-through display, 4 light cameras, 2 IR cameras and a microphone array with 5 channels. With these sensors, the HoloLens 2 facilitates both human and environment understanding. It supports two-handed fully articulated hand tracking, real-time eye tracking, voice commands and Iris recognition. In addition, the HoloLens can create a real-time model of the environment around itself, allowing holograms to interact with the real world directly.

Both enterprise and entertainment are moulding the HoloLens into a device suitable for their applications. Currently, HoloLens applications are only scratching the surface of the possibilities that are unlocked by a hands-free, wearable technology that simultaneously is a full-fledged computer condensed into pair of glasses. In the future, we can expect this technology to become even smaller and more accessible to consumers, expanding its ubiquity.

It is this future that an interdisciplinary group of knowledgeable people within TekLab is exploring.

The TekLab take on the HoloLens 2

Within TekLab, a group has been established to explore the HoloLens 2, and it consists of people who are experienced with and interested in research and development of AR applications.

The group currently consists of Trym Røed Arvesen, Abel van Beek, Audun Klyve Gulbrandsen and Joakim Vindenes. Trym, Audun and Joakim are the founders of the start-up Spello that focusses on delivering extended reality (XR) solutions. The group's knowledge about XR translates nicely to developing for AR for the HoloLens. As a computer scientist, Abel brings a strong programming background to the table.

For Audun specifically, this is not the first time he explores AR in an academic context. In his master project at the Media and Interaction Design program he experimented with mixed reality for teaching chemistry. 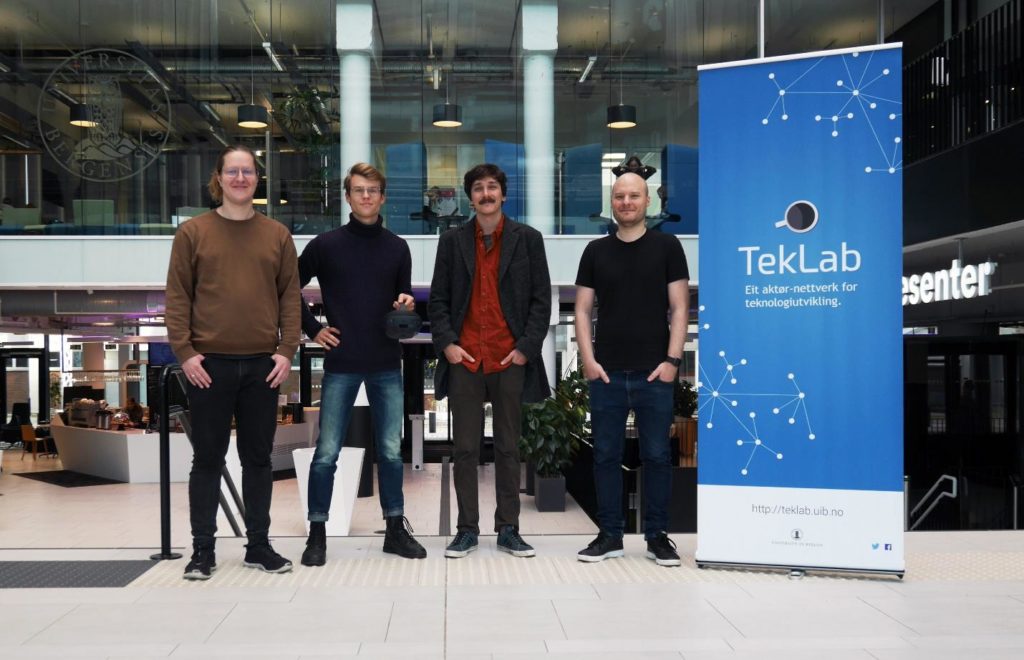 To jumpstart research and development with the HoloLens a hackathon was organized by the AR group. A challenged was created to develop a memory palace that aids the user in remembering the elements of the periodic table. The team turned the atrium of Media City Bergen into a memory palace where three dimensional objects were placed throughout, all being associated with a distinct element from the periodic table.

The goal of the group exploring the HoloLens is that the knowledge gained is shared with students at the University of Bergen, University of Stavanger, and Volda University College through demonstrations, workshops, and presentations. This way, students engage with cutting edge technology directly and are encouraged to think out-of-the-box to supplement conventional display and interaction methods. 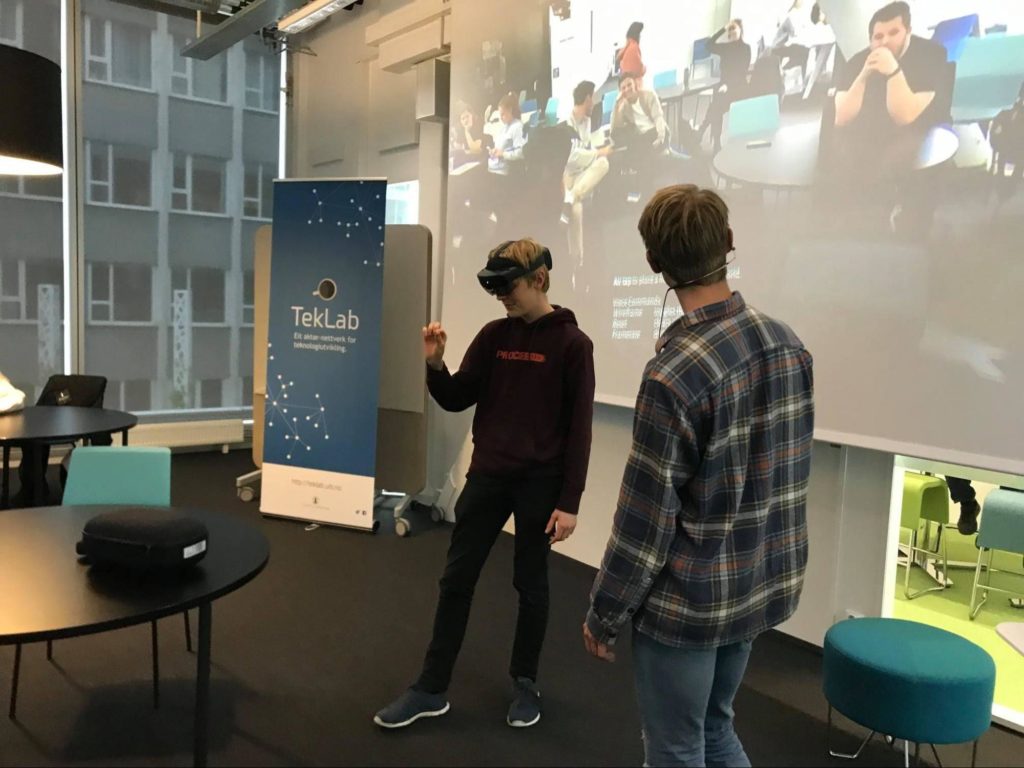 Abel presenting the HoloLens in front of a group of first year students. At the end of the presentation, the students were provided with the opportunity to try out the HoloLens 2. A real-time render of what the bearer of the HoloLens sees is projected on the big screen. Photo: Lars Nyre.

Collaboration on the west coast

The HoloLens 2 takes immersion to a new level with interpretation the users’ movements and environment in real-time. The sharing of knowledge across Bergen and Stavanger is being facilitated through presentations and demonstrations. In addition, this collaboration creates a space for exchange of expertise and experiences between not only staff, but students as well.

New exciting projects are emerging within TekLab. The explorative journey of the HoloLens 2 is a thrilling one. It is only a matter of time before we start seeing the output of bringing together creative minds together with AR. Let us see where we can take AR together. 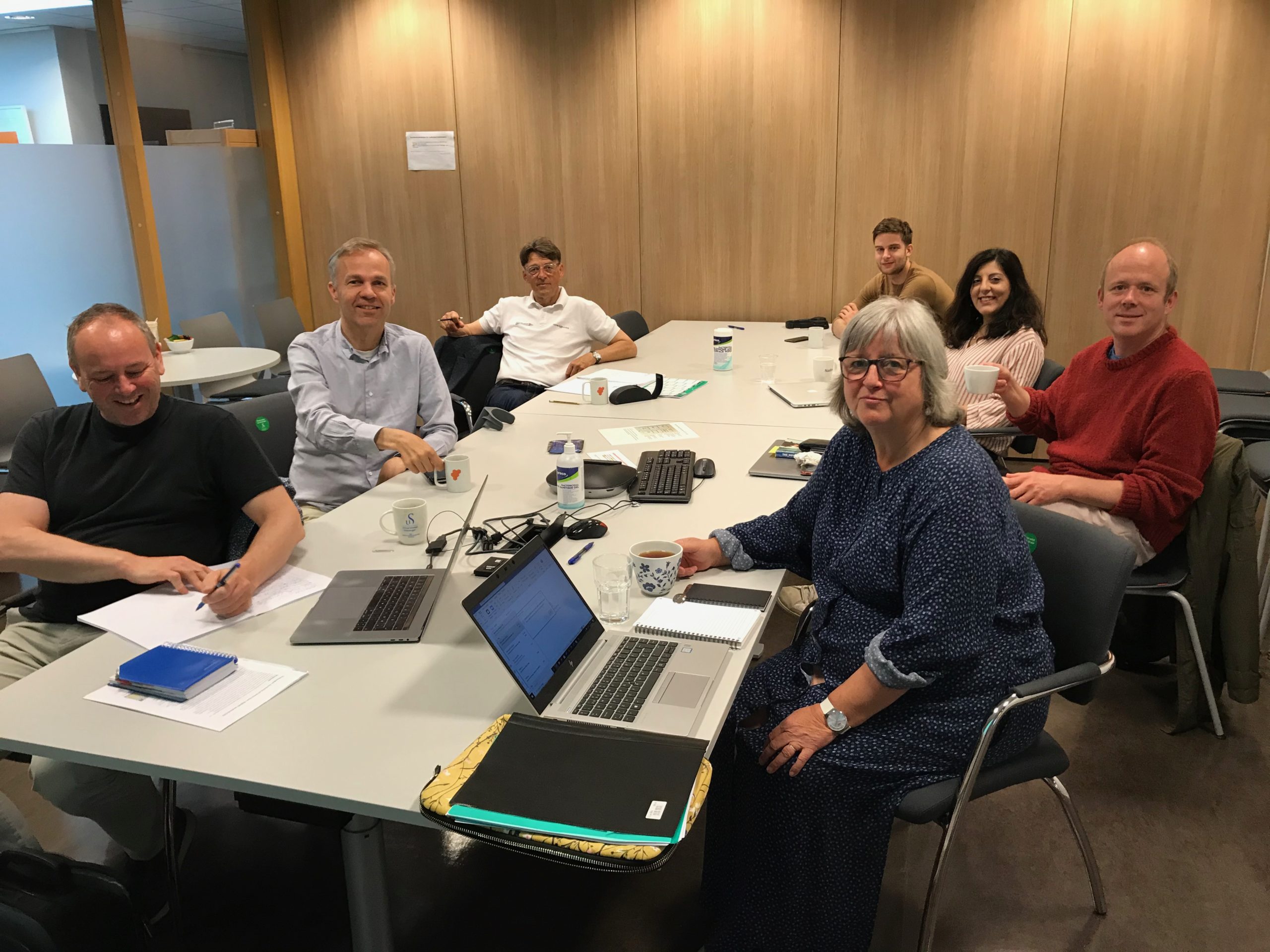 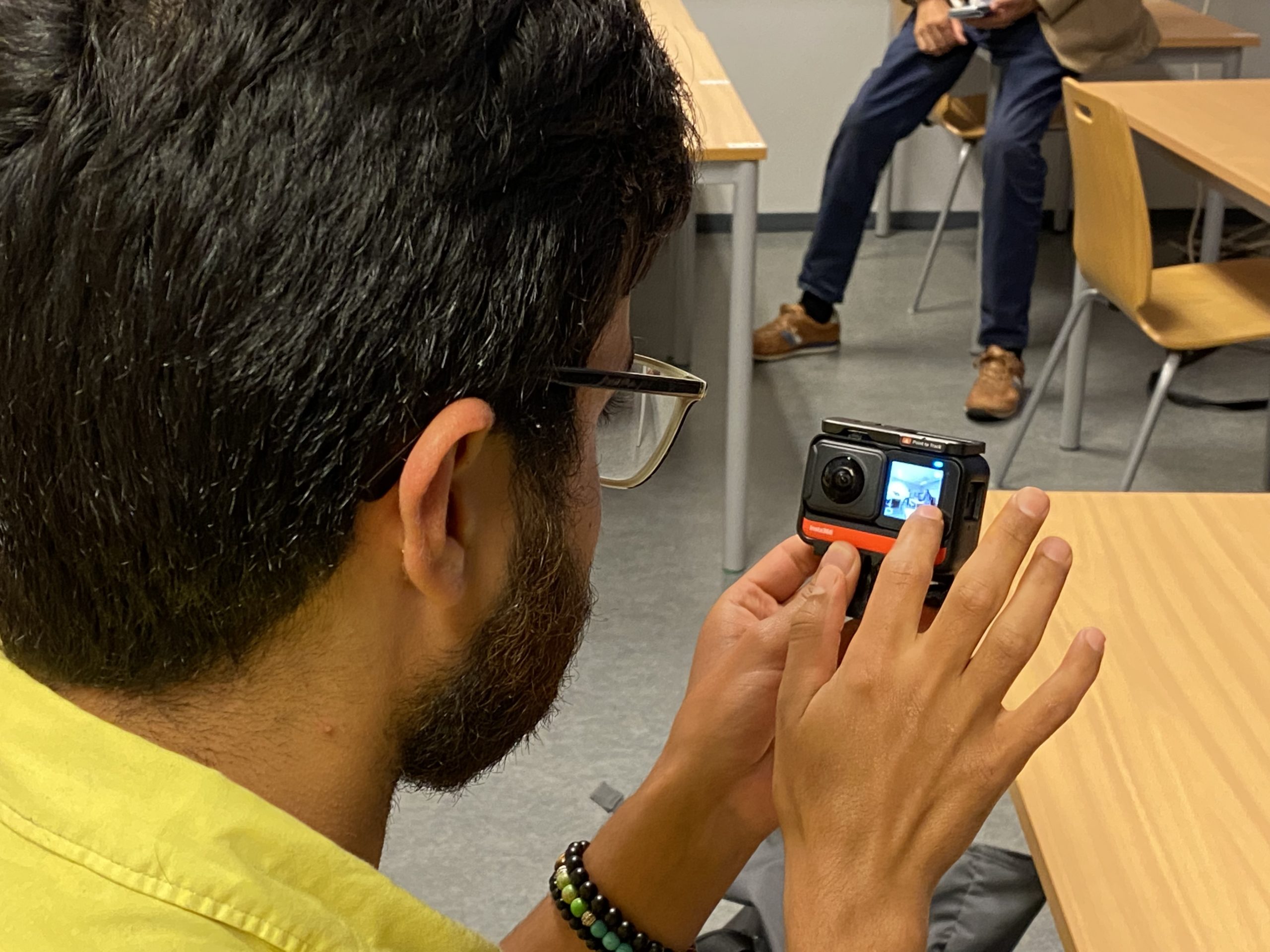 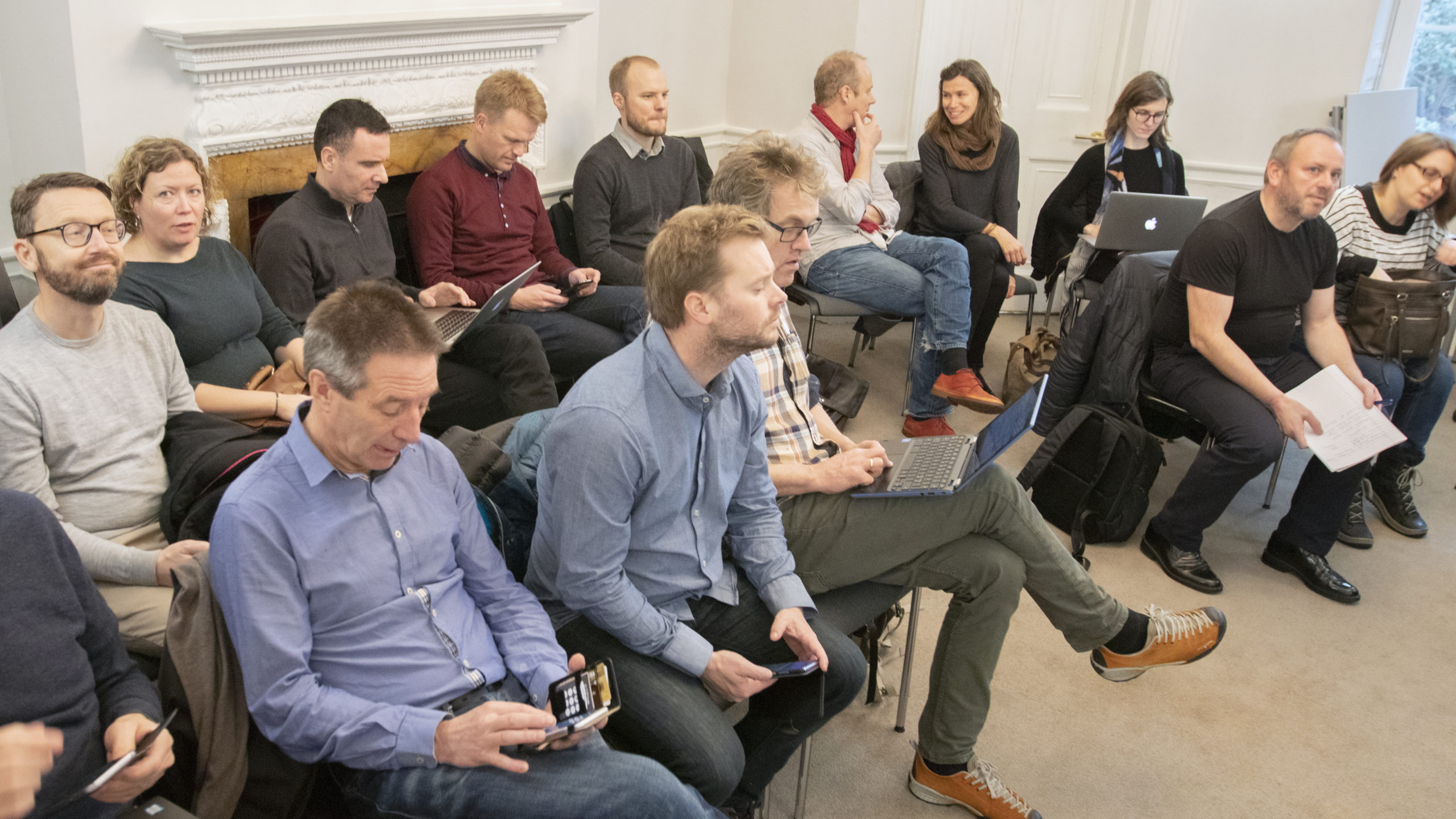 Automated Storytelling in the Future 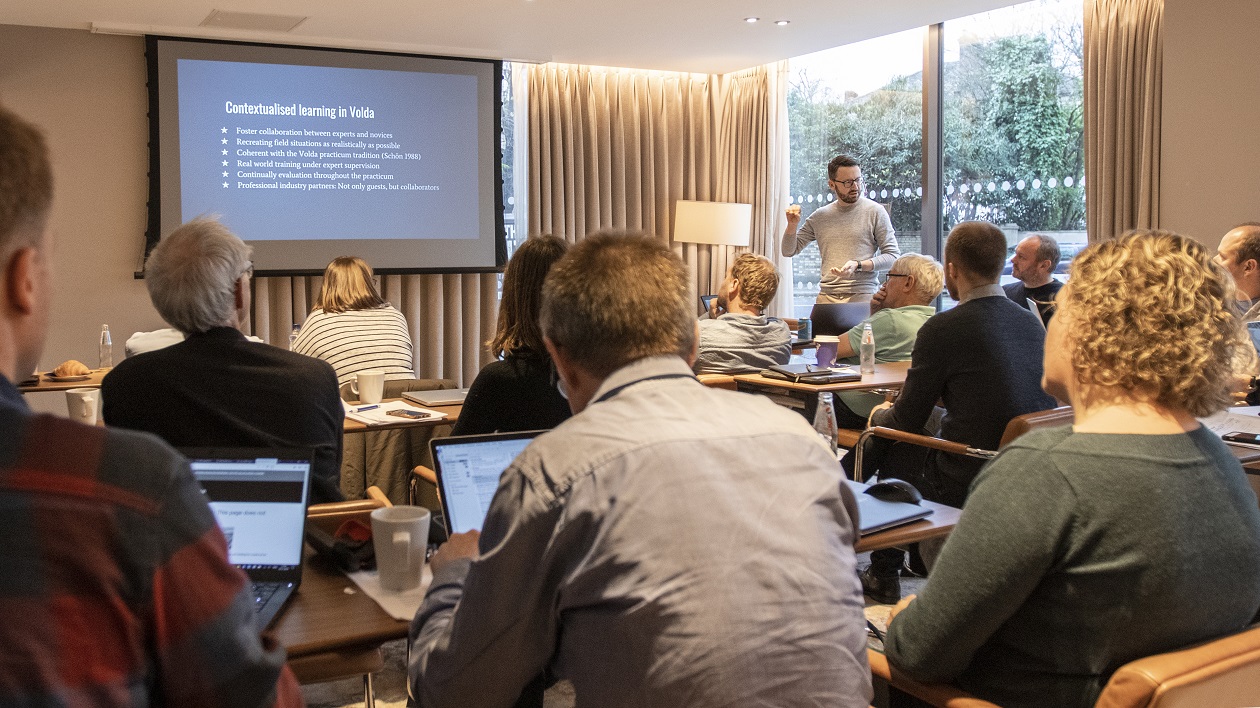